Thanks for playing our game. We heard from some of you on Facebook with some good guesses about that previous convention location. In the end, Suzann Mitten Owen, Theta-Indiana, correctly identified Le Château Frontenac in Québec, Canada (a place I have always longed to visit).


Six hundred attended the 1956 convention even though the registration had been raised to $25. Each officer personally paid her way. This was the last time that the Delta Gamma Convention Special train made the trip to a DG convention. It ran from Chicago to Quebec with stops in Detroit, Toronto and Montreal where arrivals from New York and the South converged with the Delta Gamma Special.


The French flavor of Québec city was emphasized with menus printed in French. As is always the case at convention, there was business conducted. Some highlights included:

Let's go somewhere else now, can you guess our next Convention Rewind spotlight? Here are some hints.

Posted by Hannah at 9:45 AM No comments: 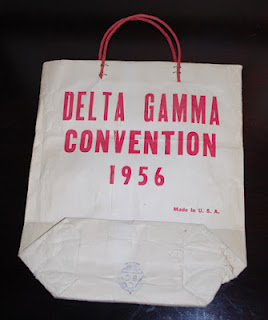 As DGs throughout North America prepare for Delta Gamma's 65th Biennial Convention (in Indianapolis in June), let's rewind and reflect on some of our past conventions.

Convention totes have been a long-standing tradition. Attendees happily fill their bags with mementos and important paperwork throughout their stays. The tote pictured above is from a past DG convention. Can you guess where they were? Were you there? Leave a comment on our blog.

Here are some hints. It would have been considered a northerly locale. While visiting, you might have heard another language being spoken there.

Check back here next week and we will tell you where the Delta Gammas convened in 1956. Email us your feedback at blog@deltagamma.org or leave a comment below.
Posted by Hannah at 7:59 AM No comments:

Sisterhood at its Finest! 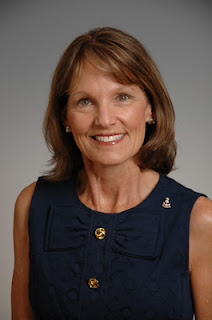 Q: What is your all-time favorite Delta Gamma memory?

A: My all-time favorite DG memory ... oh my gosh, far too many collegiate and alumnae memories from which to choose!
Collegiate Memory: I LOVED the spring time “Greek Week” when DG was paired with Pi Kappa Alpha to compete against other sorority/fraternity pairings to win races and games. And boy, was I competitive. Thanks to that pairing, I met my college sweetheart and future husband!
Alumnae Memory: So many, but serving as the co-chairman of the 2000 “Fiesta in Phoenix” Delta Gamma Convention here in Arizona was an amazing and life-changing experience for me; communicating with and recruiting more than 100 alumnae volunteers for the success of this Convention is a special memory I will be ever proud of.

Q: Which Delta Gamma convention was your favorite and why?
A: Three in particular (sorry, I cannot choose just one):
My 1st: 1982 as a very young alumnae president delegate for the newly formed Saddleback Valley alumnae chapter.
My 2nd: 2000 as the co-chairman, as mentioned above.
My 3rd: 2008  being elected to Council for my first term as the Fraternity Vice President of Alumnae - Oh my gosh.
My 4th: Hmm, TBD!
As you can obviously see, the “bigger picture” of Delta Gamma experiences and adventures revolves around our biennial Conventions, bringing so many incredible sisters “together”... collegians and alumnae. Conventions are amazing.

Q: If you have one piece of advice for a new member of Delta Gamma, what would that be?
A: Delta Gamma goes beyond your collegiate years. It is a lifetime membership and although you may not yet realize it, you have a “home” within alumnae groups across the country and Canada, and even areas abroad. It is for life and it is “sisterhood at its finest.”

Q: What did you learn from being on Council?
A: While relying on past professional and Delta Gamma successes and experiences, I learned how important it is to work collaboratively within the Board as we addressed the business of the Fraternity.
I relied on advice from a few of my Delta Gamma mentors who suggested that I:

Q: What is your hope for the future of Delta Gamma?
A: That every member (18 or 81) realizes the importance of Delta Gamma in her life; that we continue to focus on and promote the mission our three founders set forth so that members appreciate and live by our high ideals of friendship, promoting education and cultural interests, creating social responsibility and developing character. Sisterhood at its finest! 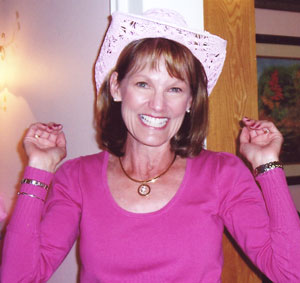