Carly Speaks: Taking a Bite Out of the Big Apple "Intro"

I can’t believe my CDC year has come to a close and now I’m a young professional in the Big Apple! I just moved across the country after landing an entry-level sales job that values hard work and dedication and I secured an amazing apartment on the Upper West Side with two roommates. Now I am here, living in the city that never sleeps and enjoying all of the amazing opportunities that come with it. Stay tuned for info on what life is like as a young graduate! I plan on posting my tips, tricks and anecdotes throughout the summer…but first, here’s a little more about me... 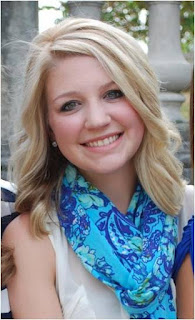 I was born and raised in Portland, Oregon and received my Bachelor's degree in Marketing from Oregon State University in 2012. When I was a freshman, I knew I wanted to join a sorority; little did I know the impact it was going to have on the rest of my life. I enthusiastically joined Delta Gamma and was a sponge to the plethora of knowledge and information I learned my first year as member. It paid off; I was elected chapter president as a sophomore and I was very glad I paid close attention to everything that went on during chapter meeting, because now I was the one running those meetings. I was fortunate enough to attend the 64th Biennial Convention in Denver, Colorado at the end of my sophomore year and it was my first real exposure to the "bigger picture" of Delta Gamma. I got to see women who truly exemplified "lifetime membership" and the most memorable being the late Miss Eleanor Slaughter, Alpha Psi- Ole Miss. It is tradition at every Convention for the attendees to stand to show how many Conventions they have attended. I was excited to show that it was my first Convention, but I was more excited to see how many other women had attended. Ten, fifteen, twenty...wow, talk about dedication. Then they called upon 28 Conventions, and the only woman to walk up was Miss Slaughter. She received a standing ovation and cheers that brought tears to my eyes. This is what it means to be a Delta Gamma. I was forever inspired.

After my term as chapter president ended, I was elected vice president: membership and attended the Delta Gamma Institute in Columbus, Ohio in 2011. The 2011-2012 CDCs were there on their interview weekend and seeing them further inspired the desire that was already within me to consider applying the following year; but what really drove me to apply to be a CDC was my love for Delta Gamma and I wanted to give back to the organization that had given me so many wonderful opportunities. I was fortunate enough to have even been chosen to be a finalist, so I was ecstatic when I was offered the job.

The first year after I graduated college was a whirlwind. I got to live and breathe Delta Gamma all day every day and it was my goal to inspire at least one collegiate member to be the best member they could be. I met numerous women over the course of my year as CDC and I couldn't imagine what my experience would have been like if it wasn't for the spirit of our members across the country.

Read my first “official” blog post next Monday!
Posted by Hannah at 10:35 AM